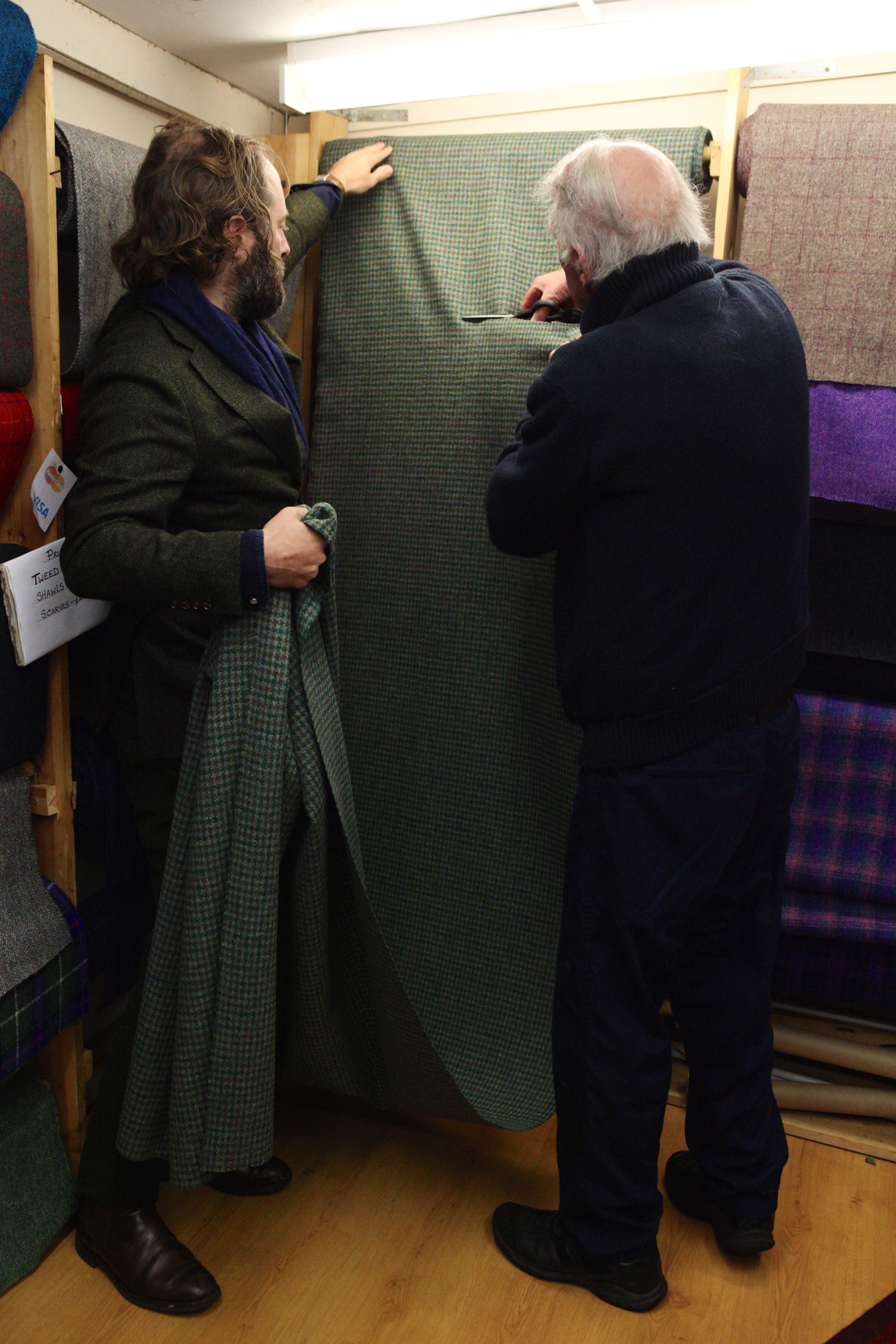 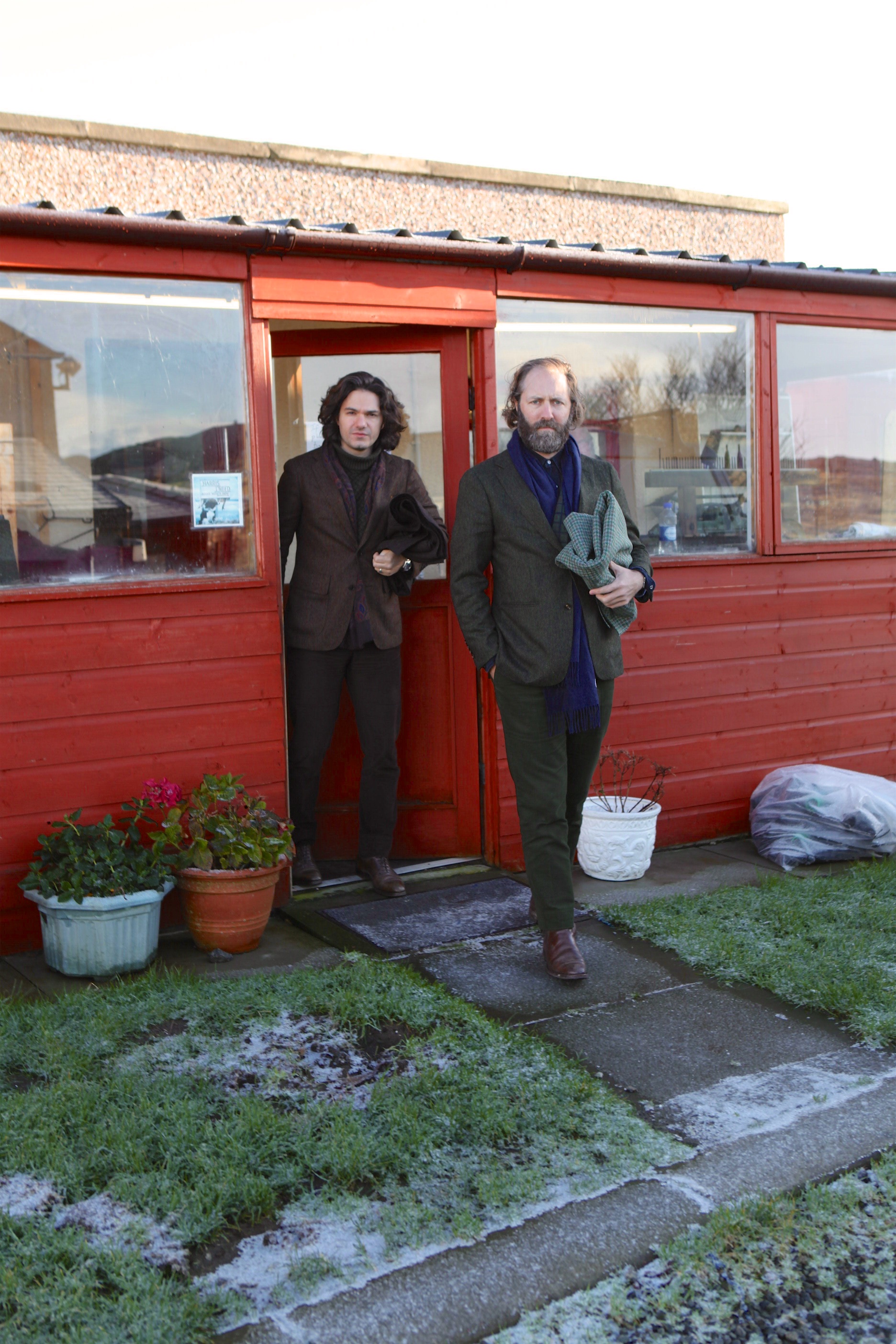 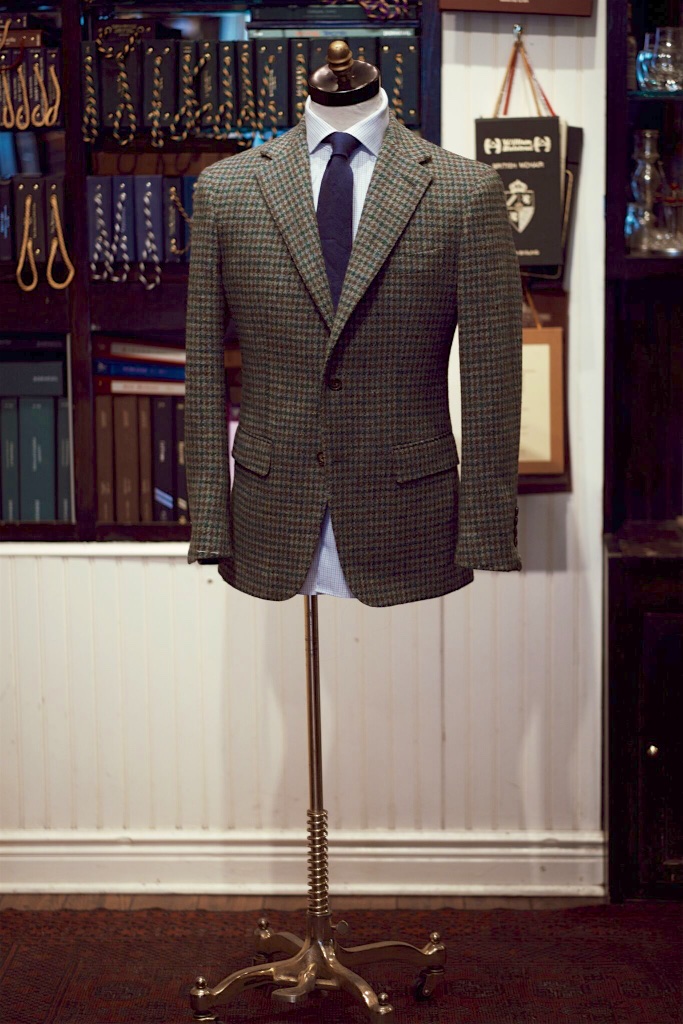 Late last year I went on a pilgrimage to Harris, where the legendary tweed is made. It’s woven in small sheds by the local residents in the stark and stunning Scottish landscape, much as it has been for 150 years. Jake Mueser, who owns a tailor in the West Village, and Matt Hranek, a photographer and fellow tweed devotee, and I drove across the extraordinary Scottish Highlands to a ferry that took us to the Isle of Lewis. From there it was an hour along dramatic hills past longhorn sheep to the small town of Harris.

I wrote about the trip for CondÃ© Nast Traveler and you can learn more details about where we stayed and ate and drank, and see Matt’s terrific photos there. But the story of the tweed didn’t end in Scotland.

A word or two on Harris tweed, so we’re all on the same page. Harris tweed is highly regulated. A local finishing house buys wool, that comes from sheep in England or Scotland. They spin it into thread, which is delivered to a weaver, usually a man, who has a loom in a small building next to his house, about the size of a one-car garage. He ties about 1600 knots to connect the thread to a decades-old loom (the fisherman in me couldn’t believe the precision), then he’s ready to weave. The loom is powered by his feet, when he’s working it looks like he’s riding a bicycle.

An experienced weaver usually finishes a bolt of fabric in forty or fifty hours, so one in a good week. Then it’s returned to the finishing house, where it’s washed, inspected and stamped with the iconic red logo. Now it’s officially Harris Tweed, beloved by royals, Japanese obsessives and your English professor.

When we visited finishing houses Jake ordered fabric for his shop (you can get it there now). All the Harris tweed you see all over the world comes from three finishing houses. And they’ve been doing it a long time–it was incredible to see thick archival books with swatches of old fabric that were remarkably daring and heavy, even by the standards of Harris.

On our last day we were driving down one of the long, narrow roads of Harris, we passed a small hand-painted sign of a weaver, Norman Mackenzie. We pulled up the dirt road and met Norman himself. He was a friendly man who sold tweed that he’d woven. Like many of the people we met, he was easygoing but clearly took pride in his work. When we’d chosen what we wanted he unrolled the bolts and measured out the two meters needed for a jacket. Then he cut it off in a business-like way without a trace of sentimentality. We shook hands and marched out into the fresh air, as the sun melted the night’s snow on the hilltops.

Since it hadn’t returned to a finishing house this wasn’t officially trademarked Harris Tweed, but we didn’t care. In a sense, it was better that way. This came from the man who wove it. And when you’re in Harris the cloth feels very much of the land. The colors are similar (naturally since it was originally developed for hunters who wanted to hide themselves in the landscape). It’s heavy enough for to handle the elements and the thorns. There are more vivid colors now, but I wanted to adhere to a classic style and went with an earthy grey and green houndstooth.

When we got back to New York, Jake’s tailor took the fabric and made a jacket out of it. I like Jake’s approach, his house style is lightly structured, in the Italian sense, but maintains a nice lapel with a relatively high notch and a healthy width. The fabric is heavy enough that it doesn’t need much encouragement–it’s already expressive–and will wear in wonderfully.

Of course it’s nice to feel the connection to where your clothes are from, and nice to know where they’re tailored. This was taking that idealistic premise to the next level, from Norman’s weaving shed in Harris to Jake’s workshop in Manhattan. Obsession can lead us a long way to make that connection real, but luckily we took the scenic route.

Comments on “Men of the Cloth.”

This is the type of story that I love to read. Not sure why, but there’s just something about adventures like this one that leave me happy inside. I don’t have any sentimental attachment to any piece of clothing I own, but if I obtained a jacket in this way, I could see that it would become more than just a jacket.

Is that the finished jacket in the bottom right picture in the header? Nice article, Dave. Sounds like you had a good time in Harris!